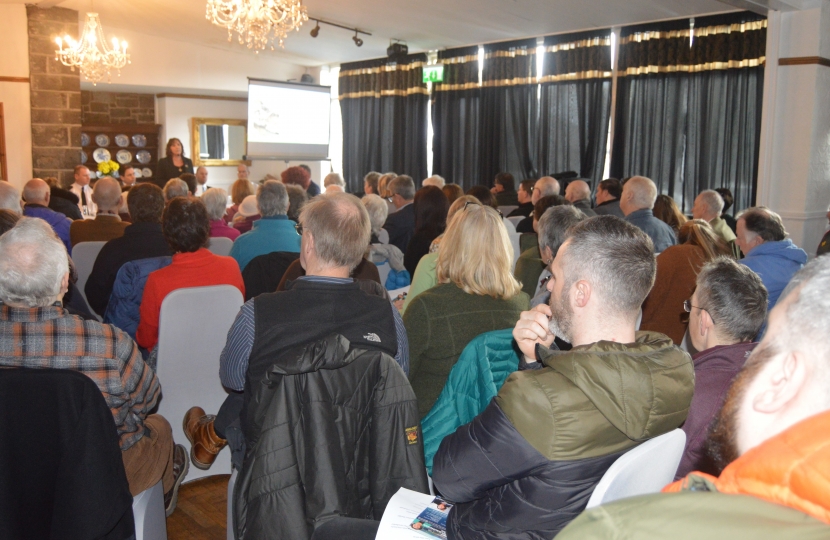 Further to the public meeting arranged by Janet Finch-Saunders, Assembly Member for Aberconwy, to discuss flooding in the Conwy Valley, action is being taken in an effort to try and tackle the problem.

Over 120 residents gave their time to attend the meeting held last Saturday at the Eagles Hotel, Llanrwst.

The Member is currently in the process of preparing a report detailing the concerns raised and the action to be taken.

Commenting after the meeting, Janet said:

“I would like to thank all residents who gave their time to come and discuss flooding and a way forward.

“The devastation they have faced is shocking and upsetting.

“We heard accounts of homes being flooded with little warning; properties left in vulnerable and uninhabitable conditions; damaged roads; blocked culverts; serious problems with receiving free sandbags, and the need for urgent action to protect homes such as on the Y Berllan and Perthi estates in Llanrwst.

“Currently, I am yet to hear of anyone who has received any emergency financial support, and I have noted that the storms have had a detrimental impact on businesses not only in Llanrwst, but Betws y Coed and Capel Curig.

“I am in the middle of detailing all the issues raised in a report so that it is clear to everyone what the concerns raised with me are and how I am working to tackle them.

“In addition to this, I am delighted that Robin Millar MP is working to secure support from The Rt Hon George Eustice MP, Secretary of State for Environment, Food and Rural Affairs, for the independent review of the flood mitigation measures in the Conwy Valley, which I have been calling for, and seen blocked by the Welsh Government, since last March.

“There is a need for all of us to work together to help ensure that the risk of serious flooding to homes and businesses in the Conwy Valley is reduced. This includes NRW who refused to attend yet another public meeting”.