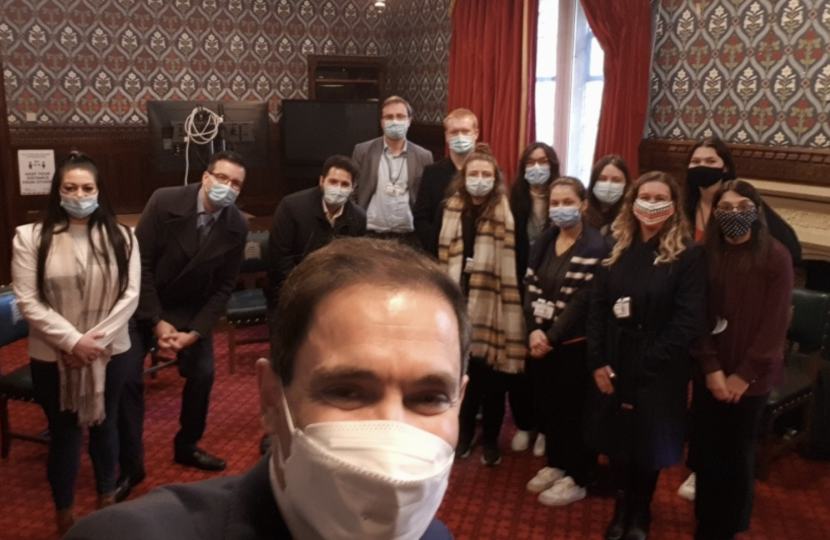 Yesterday I voted in support of the Statutory Instruments the government proposed to help deal with the “Omicron” variant.

First the political debate over the weekend in the press (and on here) has been highly polarised. The comments have characterised it as a choice between an irrecoverable loss of liberty on one hand or an unacceptable loss of life on the other. Both of these are wrong. They are also unhelpful – especially when you are also considered “good” or “bad” if you subscribe to one or they other. The answer as ever lies somewhere between them.

By contrast the debate in the House this afternoon (and with my colleagues out of sight of cameras and microphones) has been civil and engaging. I am disagreeing with good people who I respect greatly – but civilly. And I am encouraged by that.

LET’S GET BACK TO THE FUNDAMENTALS

Second, let’s remember what this is about. The vaccines developed here in the UK have prevented infection, reduced the severity of infections where they do happen and also have a small impact on reducing transmission to others. But viruses mutate and we have so far dealt with variants with names like “Wuhan”, “Delta” and now “Omicron”.

Each variant has two key characteristics: how contagious it is (how easily it spreads) and how dangerous it is (will it hospitalise us, or worse). That is what any measures have to address.

We know the new omicron variant spreads easily. That means we will see more cases, more quickly than before – currently the number of cases is doubling roughly every two to three days. We don’t know when the peak will be or how high it will be but we know it will come very quickly.

The burden on our NHS will be felt, if predictions are right, in early January, just about when MPs are returning to the House. So it is right to consider actions that will reduce that spread and consider them now – that is to say, we are acting early.

What does that mean? Wearing masks in limited circumstances where large numbers of people meet and opting to work from home. Both sensible precautions.

What we don’t know yet is how dangerous omicron is – by the time we have figured that out it could be too late to take effective action.

I believe in “hoping for the best and planning for the worst”. I hope that omicron turns out to be milder and less dangerous than previous variants (I think there is a good chance that will be the case).

But we have to prepare for many hospitalisations. We have to provide those booster jabs.

That is why the government has confirmed today that Wales will get the supplies it needs to ensure jabs for Welsh residents by the end of December and will provide financial certainty to help the welsh government make plans to the year end.

WILL I LOSE MY LIBERTIES?

No. These SIs do not do that for three reasons.

I will say it again – I am opposed to mandatory internal vaccine passports (or mandatory vaccinations for the general public for that matter).

I note that some jobs already require a vaccine (eg Hepatitis in order to work in certain environments). So it seems reasonable to me that a carer or health worker would want to ensure the interests of their patient and recognise the benefit of a vaccine to work in close contact with the most susceptible and vulnerable.

It boils down to three things:

Safety and wellbeing of people. I think accusations now of being hasty, or too harsh are better than trying to justify doing too little, too late in the New Year.

Minimal economic impact. These are very limited measures, for a short period of time. There will be an impact, but it is small.

Civil liberties are not being lost. I am grateful to those alert to this who warn of a slippery slope but warnings inform, not deny, measured actions.

It is also nothing to do with “following the Whip” or “sending a message to government”. I told the Whips how I was voting this afternoon as the debate unfolded – just like I have told them my unhappiness and disappointment about the distractions from our work by “gatherings” that are now being investigated (one day I will write a post about what working with the Whips is like!)

AND WHAT ABOUT WALES?

I think this is relevant to Wales based on my inbox alone! But I discussed this point with some first year law students from Bangor University (pictured) who visited Westminster this week.

As UK citizens and residents, I represent you in the UK parliament where I vote on matters affecting UK residents. About a quarter of the Welsh population lives within 15 minutes of the English border and we cross it daily in huge numbers for family, friends, leisure, work, public services and more. That flow is both ways so what happens in England impacts on us here in Wales.

Thank you for all your messages, which I have read with care and will be replying to over the coming days.