Cllr. Greg Robbins is one of two councillors who represent Mostyn Ward on Conwy County Borough Council.  He was first elected to the local authority in May 2017. Greg was appointed to the authority's Cabinet in June 2019, taking responsibility for the environment and transportation.  Greg also represents Gogarth Ward on Llandudno Town Council, he was first elected to the town council in May 2008.  Having previously been the Mayor of Llandudno and sat as a member of Plaid Cymru, Greg crossed the floor in early 2016.

Greg's late father’s family are from the area. His grandfather owned a farm in Llandudno Junction and until fairly recently he had relatives running a shop and a cafe in Llandudno.

He had been involved in the construction industry since starting work on the Conwy Tunnel in 1987 for Tarmac Construction and subsequently becoming a Contracts Manager for a local company until recently. Since then he has specialised in Construction disputes and the legal side of the industry.

Greg is married to Debbie with two daughters, Kira aged 20 and Holly aged 31, and has two grandchildren, Elysia and Jack. He is also an animal lover and has two dogs and a cat at home.

Hs is a Past Mayor of Llandudno, has been Chairman of the Planning & Transport Committee for several years and is a very active member of various other committees and sub committees including Community Services, Finance and General Purposes, Transportation and Public Rights of Way, Decorative Lighting and Staffing. He also represents the council on the Great Orme Management Advisory Group, the Llandudno and Colwyn Bay Light Tram Society and the Llandudno Development Partnership amongst many others.

In addition to his council held positions, he is the Treasurer of the Llandudno and District Darts League, a Governors of Ysgol Morfa Rhianedd Primary School. He was also the Chairman of the Llandudno Victorian Extravaganza until December 2010. Greg also has a long standing interest in Amateur Radio having held a callsign since 1992 and he was Secretary and then Chairman of the North Wales Radio Society for several years and helped organise the annual Radio show that used to be in Llandudno every year attracting over 5000 visitors at its peak.

Have you seen BBC's War on Plastic? Live in Conwy? Concerned about your plastic waste? Greg's here to explain what happens - click the headline to watch. 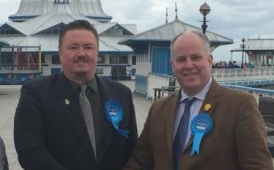