Harry lives on Llandudno’s West Shore and has been a resident of Llandudno since the early 1990s, with his family’s association with the town going back several generations.  He went to Rydal Penrhos and then Llandrillo College, before attending university in Aberystwyth where he gained an MScEcon in International History.  Following university Harry worked within the heritage rail tourism sector for a short period, before taking up a position working for Guto Bebb MP in 2014.  Harry continues to volunteer regularly for the Ffestiniog and Welsh Highland Railway, one of North Wales’ premier tourist attractions.

Harry was elected as one of the county councillors for Gogarth Ward in a by-election in December 2015, becoming the then youngest member of the local authority.  He was also elected to serve the ward on Llandudno Town Council in May 2017.  In 2017 he achieved the largest majority of Aberconwy's Conservative councillors.  In 2019 Harry was delighted to be elected to serve as the Deputy Mayor of Llandudno for the 2019/20 municipal year - he is the youngest individual to ever hold this office.

Gogarth covers the northernmost quarter of Llandudno and the whole of the Great Orme - it is one of the most charming and varied wards in the county.  Since being first elected Harry has made an effort to be approachable and assist residents with any issues or queries they may have.  He has also worked closely with the Friends of West Shore and the Llandudno Hospitality Association to support their efforts to enhance and improve our neighbourhoods.

Several hundred turned out to see the Mayor, Councillors and visiting civic dignitaries. Attending the service and parade was the Assembly Member and former Llandudno Mayor, Janet Finch-Saunders. 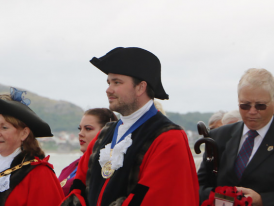