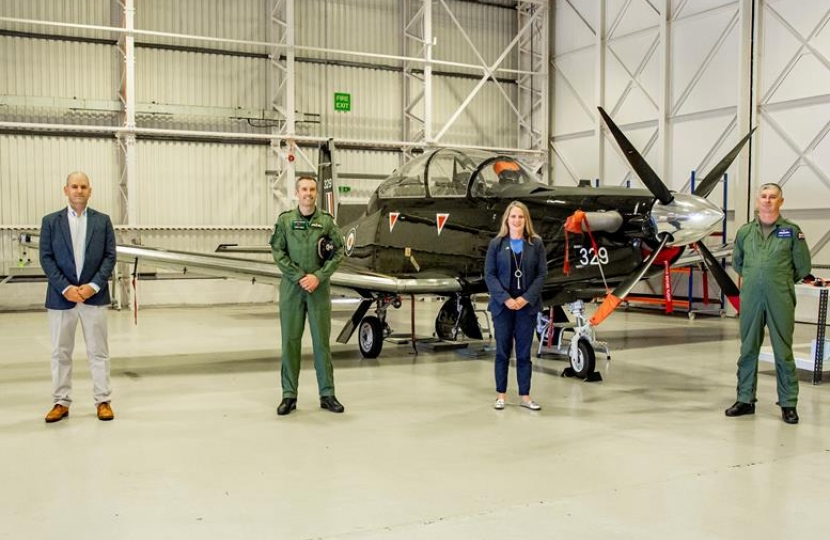 RAF Valley has long provided employment and invaluable services to the people of Anglesey. Those at the station are now working with MP for Ynys Môn Virginia Crosbie to strengthen her ability to champion the RAF in Westminster.

On a tour of RAF Valley, Ms Crosbie was shown around some of the site's top training facilities. Including those teaching basic and advanced jet flying training, mountain rescue and air traffic control. By learning about the operation of RAF Valley, and the RAF in general through the Armed Forces Parliamentary Scheme, Ms Crosbie aims to provide an informed view and stronger voice in Westminster.

After the visit, Ms Crosbie commented “I am pleased to be given the opportunity to learn about the hard work undertaken by those at RAF Valley and other bases all over the United Kingdom. I will always defend our invaluable Armed Forces; I will champion RAF Valley and the crucial role that it plays in the defence of our nation and I will always act in the best interests of the security of the United Kingdom.”

Station Commander of RAF Valley Chris Moon is supportive of Virginia’s ongoing connection to the station, saying that the Armed Forces Parliamentary Scheme “encourages engagement and understanding between our Armed Forces and elected members who ultimately decide how we are to be structured and utilised in order to protect the UK and our allies.”

“I look forward to hosting Virginia and her fellow members here at RAF Valley where we continue to play a critical role, training pilots for the Royal Navy and next generation RAF as well as our international partners.”

Victory over Japan Day or VJ day is this Saturday and this year is particularly special as it is 75 years since the allied victory of Japan – the event the day commemorates. This day effectively ended the Second World War, thus marking it as an important date for remembering those who made the ultimate sacrifice for us.

The Prime Minister, Boris Johnson, said of VJ Day 75: “On this anniversary I want to remember what we owe the veterans of the Far East campaign. They brought an end to the Second World War, they changed the course of history for the better, liberated South East Asia, and many paid the ultimate sacrifice. That’s why on this remarkable anniversary – and every day hereafter – we will remember them.”

Budget 2021: The Chancellor's Speech in Full

Read and Watch the Chancellor's Budget announcement here in full. One year ago, we promised the British people we would do whatever it takes to provide security and stability.